Skip to content
Menu
“Improving access to dental care- one village at a time”
Donate
October 30, 2019 / News / no comments 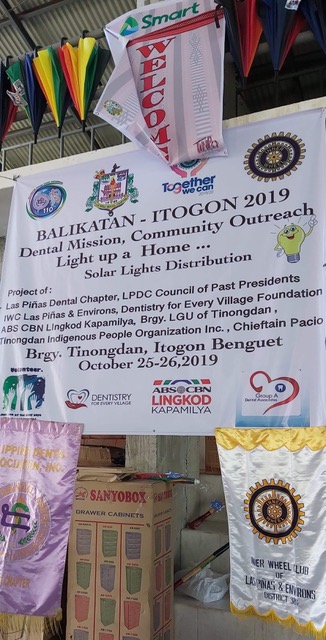 The D4EVF volunteers are blessed with the opportunity and good fortune of providing humanitarian dental services for many people in the Philippines, particularly the poor, neglected and underserved indigenous people.

They have treated the Ati People at the mountains of Dumarao in the Province of Capiz in the Visayas. They have served the Aetas at the hills of Porac, Pampanga in middle of central Luzon and the Itas at Orion, Bataan. Now, they finally had an opportunity to go up in the northern part of the country- to Itogon, Benguet, an 8 hour bus ride from Manila via NLEX up high in the Cordillera Mountains in north eastern Luzon to provide dental work for the indigenous Ibalois, the Kankanaey and some native Ilocanos at Barangay Tinongdan.

Itogon is not too far from the famed mountain vacation town called Baguio City. It is an area known for its natural beauty and cool weather. It is primarily a mining town, the site of the world famous gold producing Benguet Consolidated Mining Corporation and the Philex Mining Corporation. Working in the mines and doing agriculture are the two main livelihoods of the people in the area.

Known tourist destination areas in Itogon include the Ambuklao Dam in Bukod and the Binga Dam that corralled the Agno River in Tinongdan and Balatoc Mines Tours in Balatoc. Other tourist spots include the open pit mines in Loacan, hot spring in Dalupirip, Mount Ugo in Tinongdan, Level 1300 swimming pools in Poblacion with hot steams and bath and the mummies in Domolpos also in Tinongdan.

The mission at Barangay Tinongdan at Itogon on October 25 and 26, 2019 dubbed as Dental Mission and Outreach Program, Light UP A Home was more than providing dental work. With the aid of other groups that includes the Inner Wheel Club of Las Piñas and Environ, the Philippine Dental Association Las Piñas Chapter, The LPDC Past Presidents Circle, Group A Dental Associates and the ABSCBN Lingkod Kapamilya, and village volunteers headed by Chief Norberto Pacio, the people where provided solar lights. The solar lights were donated by Inner Wheel Club of Las Piñas, Alumni from the CEU School of Dentistry, the PDA Las Piñas Chapter and other donors. The solar lights were particularly helpful to those living in certain areas of the village where to these days, water and power are still large issues not withstanding the presence of two huge dams that were meant to provide such.

The hundreds of dental procedures performed ranging from basic dentistry to emergency dental work were life changing for the mountain people of Barangay Tinongdan. More importantly, it allowed them to see the merits of preventive dentistry and its effect to their daily lives. It was heartwarming to see their faces lit up after work was done on them, particularly those that had restorations in their front teeth.

The solar lights provided in many homes in the village were well appreciated. At the very least, now people don’t have to fumble in the dark or use their old fashion home made lights that are not only inefficient but cumbersome as well.

Aside from doing dentistry and distributing solar lights, there was the usual “tooth brush drill” and distribution of toothbrushes and toothpastes. Some of the volunteers went one step up and shared their expertise in basic hair and nail cutting techniques as well as the prevention and treatment of hair lice in children and adults. A physical therapist that came with the group demonstrated basic physical therapy techniques to ease sore muscle and minor aches and pain. Then there was fitness program highlighted by zumba classes and the blood pressure monitoring.

The mission at Itogon was a big awakening experience for the volunteers of D4EVF as well.  It is now more obvious that there is more to it in their missions than doing dentistry to help improve the lives of the poor living in outlaying areas. It is a challenge that will be accepted!