Skip to content
Menu
“Improving access to dental care- one village at a time”
Donate
September 6, 2018 / News / no comments 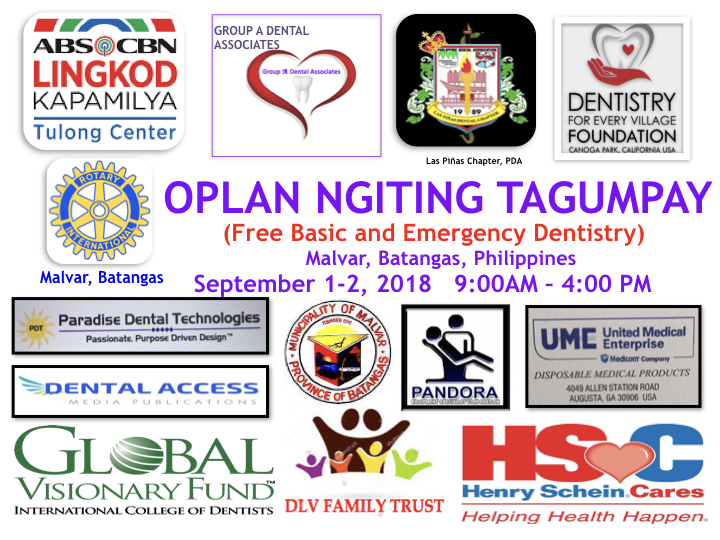 What started as a trial balloon project so to speak, with the Rotary Club of Malvar, Batangas turned out to be an outstanding project for the Foundation.

Thanks to all the experiences gained from the various missions in the past years, particularly from the huge Calumpit Mission done early this year with the help of Lingkod Kapamilya Tulong Center, a charitable arm of the biggest media conglomerate in the Philippines, ABSCBN, the mission at Malvar turned out to be one of the most organized mission done by Foundation.

What turned out to be the game-changer was setting up the equipment a day ahead of the mission date.  That alone saved the three hours needed to set up and test run the ever-increasing dental equipment for the mission. With that, from the get-go, when the mission started the next day, the flow of the patients and the treatment procedures went off smoothly.

Each patient, pre-selected by the Rotary Club from the five poorest villages in the municipality went through a triage section that directed them to what particular treatment area they needed to go.

What also made a difference was the introduction of three huge 18-liter steam sterilizers and the additional surgical hand instruments and small equipment brought from the Foundation central office at Canoga Park, California.

The new micromotor units dedicated for the Sealant and Fluoride Application section also changed the dynamics in the Restorative Section. There was no more sharing of dental units between the two sections, allowing the volunteers assigned to each section to see more patients.

The Sealant and the Fluoride Application section was a boom for the many youngsters seen at the mission. A good number of them were seen at this section. Thanks to the sealant materials donated by International College of Dentists Global Visionary Fund of Flint, Michigan, the Henry Schein Cares Foundation of Melville, New York and the United Medical Enterprise of Atlanta, Georgia.

Twenty four volunteer dentists from the Las Piñas Chapter of the Philippine Dental Association supported by two registered nurses and one physical therapist participated as well as numerous members of the community, staff of the local Department of Health and the Malvar Rotary Club headed by Dr. Roderick Macasaet, a local pediatrician.

ABSCBN Lingkod Kapamilya Tulong Center provided breakfast and the vans for the volunteers to travel to and from Malvar as well as many sundries and miscellaneous supplies for the mission. They also provided a soup kitchen for the patients and a mobile library.  In addition, they had an ABSCBN News segment producer and camera crew to document the event for broadcast in their local affiliate stations.

The Rotary Club of Malvar took care of the snacks, lunch, and dinner for the volunteers and all the necessary items like the tables, chairs and directional signage for the patients and auxiliary volunteers. They set up a special “buffet lunch room” for the volunteer that served delectable dishes and was fully stocked with delicacies and tropical fruits from the municipality.

Two hundred forty one patients were seen at the mission, a number way over the original pre-selected one hundred and sixty patients by the Rotary Club who are in most immediate need of dental treatment. The sudden increase in number was due to the many that simply walked-in, particularly parents that brought their children who upon examinations showed that they are in dire need of dental services. Everyone that made the cut-off time was treated. Those that were beyond the treatment capabilities of the volunteers under the set up they brought for the mission were referred to public health care providers in other cities.

The services provided by the volunteers included oral prophylaxis, fluoride and sealant applications, resin bonded composite fillings, root canal therapy particularly in the front teeth, installation of polycarbonate crowns, and extractions that included removal of some troublesome impacted third molars and plenty of broken down teeth. The presence of a hand-held portable digital x-ray and a laptop to run the program helped enormously the surgical and endodontic section.

“We had some people from the national government as well as many from foreign groups that occasionally do medical missions in our municipality, but this is the first ever dental mission done here” stated Dr. Roderick Macasaet, a local pediatrician and president of the Rotary Club of Malvar.

Dr. Amry Jane Chavez presented tooth-brushing and flossing instructions to the patients as they waited their turn in the respective sections they were directed to go. Toothbrushes and fluoridated toothpaste were also passed to everyone in the waiting area.

The Municipal Government of Malvar headed by Mayor Alberto Lat, who happens to be a past president of the Malvar Rotary Club also provided plenty of assistance including the free use of the municipal cultural center where the mission was set up. The covered venue was a blessing as monsoon rains kept pouring as the mission was being conducted. Members of the municipal staff and the local Department of Health came to help direct patient traffic and assist the dentists. The maintenance personnel of the Cultural Center was there as well to assure no interruption in the air conditioning system and power.

Every patient that has completed treatment was asked to fill out a survey form that was designed by the members of the Rotary Club. The response to the project was an overwhelming appreciation for the services provided. Out of a possible perfect score of 4.0, the average was a whopping 3.94 percent.

Some of the patient’s comments went as follows:

“Magaling po yung dentistang bumunot sa akin. Nawa magkaroon pa uli nang ganitong proyekto”  (The dentist that took my tooth out was very good. Hopefully, there will be more projects like these”).

Following the successful mission, a Fellowship Night with the Malvar Rotarians was held at the residence of one of the town’s most successful doctors,  Dr. Teodoro Cabiscuelas. The good doctor opened his house to all the Rotarians and the D4EVF volunteers. The highlight of the event was the presentation of the first-ever Honorary Membership presented by the Malvar Rotary Club. Dr. Ed de la Vega was the recipient of the honor. Dr. Roderick Macasaet, the President of the Malvar Rotary Club, presented a Certificate indicating the honor to him.

Every single volunteer was likewise given an “Appreciation Certificate” and a basket of goodies in honor of the selfless services they provided for the people of Malvar.

Needless to say, the mission was a rousing success!

More importantly, it precisely hit the mission of the Foundation. It not only provided access to basic and emergency dental services to the indigent people of Malvar but it also opens an awareness to and an appreciation of the value of good oral health care.