Skip to content
Menu
“Improving access to dental care- one village at a time”
Donate
September 7, 2017 / News, Projects / no comments 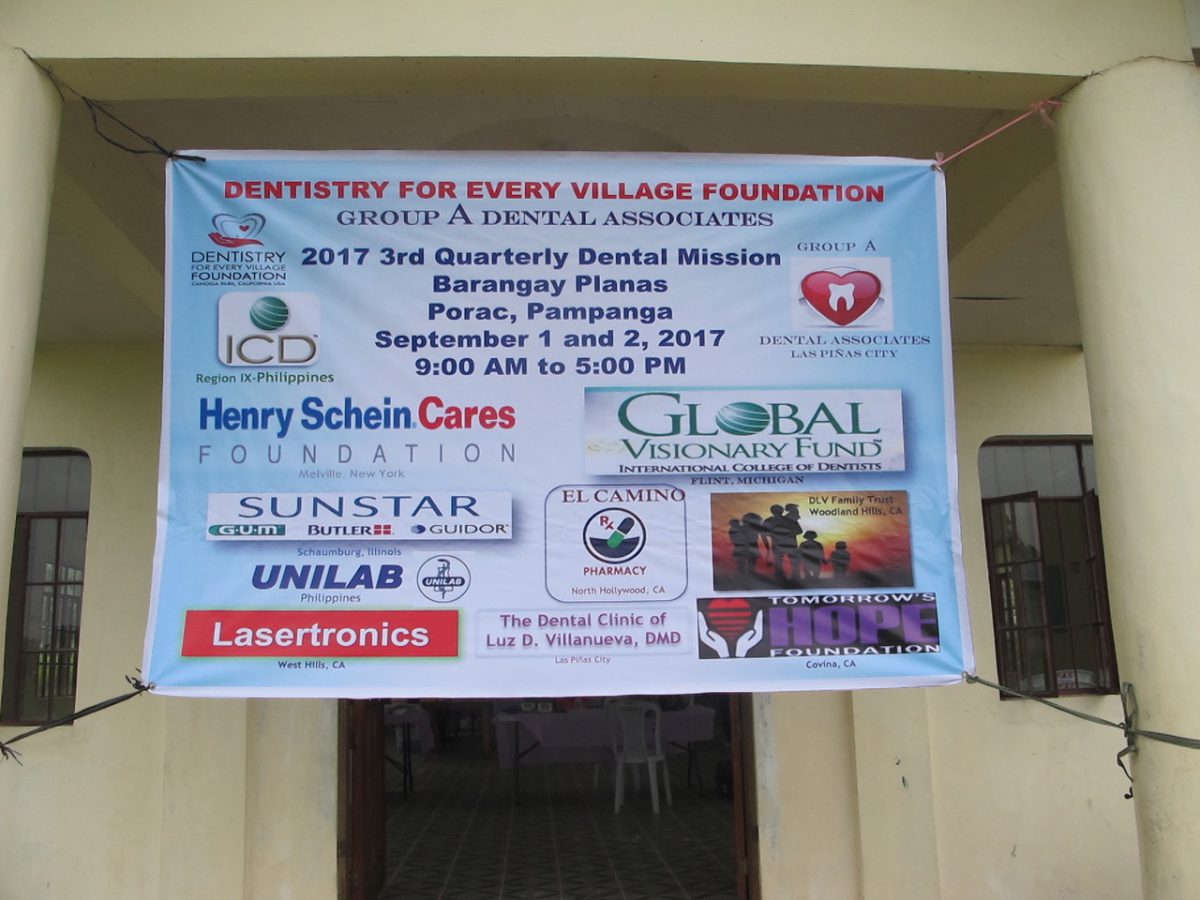 In spite of the intermittent rains on the first day of the mission, the event went on as scheduled. It was held at a local church in front of a makeshift soccer field at a resettlement village located at Barangay Planas, Porac, Pampanga. The Philippine government provided the settlement for the Aeta People following the explosion of the Mt. Pinatubo Volcano in June 15, 1991. The catastrophe was the second-largest volcanic eruption of the 20th century, and by far the largest eruption to affect a densely populated area. Amongst those mostly affected were the indigenous Aeta People who predominantly considered Mt. Pinatubo and its surrounding countryside as their ancestral domain.

The Aeta were resettled in several surrounding provinces near Mt. Pinatubo, primarily in the Provinces of Pampanga, Tarlac, Bataan and Zambales. There was a reason why the government selected these provinces- they were a day or two walk from the ancestral home of the Aeta, therefore the Aetas can always go back to the mountain and do their usual farming and hunting – activities they can not do in the resettlement areas in the flatlands.

Two other volunteers, Joven Franzuela and Roco Ibe participated as technical support members in charge of the equipment. They brought a friend, local registered nurse,  Archie Caguiat, RN. Mr. Caguiat took care of the preliminary patient screening assessing their vital signs (T-P-R and BP) with the help of Analie Suansing before they were sent to the Diagnosis and Screening Section.

To streamline the procedures, patients coming from the Diagnosis and Screening Section were directed to a specific section to have a procedure done much like an assembly line. Patients were first seen for x-rays and then sent to the oral prophylaxis section. If they do not need anything else, which is rare, they are directed to the patient education section. However, if they needed fillings, they are sent to the restorative area. From there if they needed an extraction, they were directed to the surgical area. Lastly, patients were directed to the pharmacy section if they needed antibiotics and analgesics and finally to the patient education section where they were given a presentation on oral health instructions and the value of good oral care. Toothbrushes and paste were distributed to those that completed the whole cycle including those that simply came to listen to the oral health care presentation.

Multiple procedures were done on most patients thus, in spite of only having 235 patients more than 800 procedures were completed. During the mission, the volunteer dentists provided treatment not only for the indigenous Aeta People but also to several lowlanders who are not indigenous Aetas but resided in villages within walking distance from the venue.

During the mission, the volunteer dentists, for the first time ever, were able to use a digital x-ray system brought in from Los Angeles by Dr. Maritone Olaer coupled with a handheld dental x-ray unit. Needless to say, the unit complemented D4EVF’s own digital x-ray systems, the two air compressors, 4 portable dental units, 4 ultrasonic scalers a numerous surgical hand instruments like forceps, elevators and periotomes that are already part of the equipment of the Foundation stored in the Philippines by the Group A Dental Associates.

A feeding program was also done. Three cooks from the village were hired to prepare the food. Everyone that came to the mission was fed. The cost of the food and the salary of the cooks were provided by the Foundation. On top of that they were given food baskets to take home donated by Dr. Maritoni Olaer of the Tomorrow’s Hope Foundation and bags of rice donated by employees of the United Laboratories through Ms. Kat Carag, the UNILAB Assistant Product Manager.

The dental supplies donated by the ICD Global Visionary Fund and the Henry Schein Cares Foundation made the mission happen.  Special mention goes to Professor Phillip Dowel, the Chair of the ICD GVF, Ms. Chelsea White of ICD and Ms. Kate Sorillo of HSCF for their help in streamlining the donation of the dental supplies.

The participation of ICD Section IX Fellows  allowed the Foundation to expand the number of patients seen. We thank all the above for their immense contribution to the success of Project Porac.

We also like to thank the Aeta Tribal Council for making sure that there was  security, peace, and order during the mission.

Our gratitude also goes to Pastor Dino  Abuque of the Antioch Psalmville Church for the use of their facility.  Nothing beats doing dentistry protected by a solid roof when it’s hot and humid outside instead of being solely protected by a giant mango tree.

We also thank the countless volunteers from the village, particularly Ms. Vangie Stone who acted as assistants, monitors, gofers and who took care of sanitation and trash disposal. Lest we forget, the women of the village who cooked food for everyone that came to the mission making the event cheerful and festive.

We also like to express our gratitude to Mr. Roger Stone, a bible translator from Kansas who lives with the tribe and works at the Antioch Psalmville Church for his help in arranging for the mission to happen; to SunStar Americas of Schaumburg, Illinois for the toothbrushes and dental floss; United Laboratories-Philippines for the different medications, vitamins, cough syrups and pre-packaged bags of rice; El Camino Pharmacy of North Hollywood, CA for all the acetaminophen tables and amoxicillin pediatric antibiotics used at the mission; Dr. Luz D. Villanueva of Las Piñas City for the multicolored  toothbrushes. A special thank you to Lazertronics of West Hills, CA that sent a fat check last month allowing us to purchase a hand held portable dental x-ray unit.

And, we would like to thank the Tomorrow’s Hope Foundation leaders -Dr. Maritoni Olaer and her husband Jojo for the hundreds of take-home food baskets given to the patients and villagers; the DLV Family Trust – for the scrub suits for the volunteers and more importantly, for the resources it provided to complete the mission; the various donors that donated shoes for the D4EVF Team and resources to our coffers; and of course the Foundation’s most ardent supporters- members of the Group A Dental Associates, namely:  Amry Jane Chavez, DMD, RN,; Luz D. Villanueva, DMD; Florabelle T. Frondozo, DMD and Cecily R. Vera Cruz, DMD.

This particular mission became some sort of a homecoming for me. The town of Porac is located 50 kilometers northwest of the town of Arayat, my birthplace.

Upon learning from relatives that I was coming to do a mission for the Aetas, I was contacted by a cousin, Bon Alejandrino who recently got elected to his second term as Arayat town Mayor, to swing by and visit.

The visit was not part of the original itinerary but since I have not been home since 1967, I decided, before the mission, to make a side trip and visit. The visit, short as it was, was nostalgic. It was great to see the old ancestral home that is still standing and in great shape all through these years,  and all the changes and improvements in town. The visit was highlighted by a photo session with the Mayor and in front of the monument of one of the Province of Pampanga’s top revolutionary heroes in the Spanish-Philippine War in the late 1800’s- General Jose Alejandrino- my grandfather.